Webmin is a web-based interface for system administration for Unix. Using any modern web browser, you can setup user accounts, Apache, DNS, file sharing and much more. Webmin removes the need to manually edit Unix configuration files like /etc/passwd, and lets you manage a system from the console or remotely.

There are several well-known commercial flowchart and diagram software available, e.g., Visio on Windows, OmniGraffle on MacOS X. Then what about Linux? In fact, there are a couple of reasonably good Linux alternatives to Visio or OmniGraffle, for example, yEd, Dia, LibreOffice Draw, Pencil Project, etc.

In this tutorial, I will describe how to create flowchart or diagram with yEd graph editor on Linux. 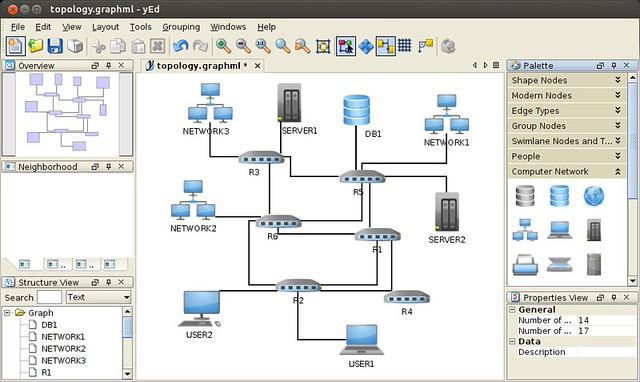 Full article here:
How to draw flowchart or diagram on Linux (Xmodulo)

This is a tale of how someone remembered that he had a non-functional router, in this case an older Linksys WRT54G, and…

… decided he would have a go at repairing this ancient router. There was only one problem: the most popular utility for programming the router through the JTAG header required a PC parallel port.

Unfortunately, parallel ports are becoming as hard to find as floppy disk drives these days, but did that deter him? No way, he simply added Raspberry Pi support to the debricking utility, and used the Raspberry Pi’s GPIO pins to do the job.  Unfortunately, in the end he was unsuccessful, but only because he physically damaged the circuity on the router while attempting to upgrade the RAM – had he not attempted the hardware modification, this likely would have worked.  So, although we make no guarantees, if you have a bricked router, read the articles linked below and maybe you can bring it back to life.

Mosh is a replacement for SSH. It’s more robust and responsive, especially over Wi-Fi, cellular, and long-distance links.

If you have ever tried to connect a computer to a HDTV set via a HDMI port, you may have found that portions of the top and bottom of the screen were cut off, possibly including an entire top or bottom menu bar (this issue seems especially acute on systems that use a “skinny” top menu bar, such as Ubuntu Linux).  This is because many, if not all HDTV manufacturers apply “Overscan”.

This is a holdover from the old analog TV days, when certain information (such as closed captions and timing information) was transmitted in the first few lines of the video, so sets were deliberately set up to not display those lines.  Digital TV, for the most part, does not transmit data of any kind as part of the picture area (at least not in the U.S.A.), although occasionally you might still see it on an up-converted standard definition video.  Usually, the only time we have every really noticed it since the digital conversion is when older commercials are played by a local TV station.

Nevertheless, most TV manufacturers enable overscan by default, even if it means that you lose a portion of the picture area most of the time.  That also implies that the picture is degraded – think about it, if the station is sending a full 1920×1080 picture, but the TV discards some of that information, then it has to try to stretch the remaining picture to fill the 1920×1080 screen.  So, you are losing resolution on those sets that don’t give you a way to disable overscan.

Some TVs do give you an easy way to turn overscan off, but the setting is called something different by different manufacturers.  Terms we have seen used are “Dot by Dot”, “Exact Fit”, “Just Scan”, or simply “Overscan” (if you know of others feel free to add them in the comments), but there are many TV’s that don’t appear to have this setting at all.  The problem is that if you are thinking about ordering a TV from an online retailer, it is often difficult to determine if the TV has a way to disable overscan or not.

Sometimes you can download a manual from a manufacturer’s site, but even it it mentions such a setting, you need to read carefully to determine if it can be used regardless of the signal source, and in particular, whether it can be used with the HDMI inputs. It seems a some TV manufacturers are still stuck in 2005, and think that there is no other way to connect a computer to a TV other than via an old school VGA or DVI input, so they only offer the ability to disable overscan on that one port.  Perhaps they think those HDMI output ports on modern laptops are just for decoration?

If you were buying a TV in a store, and IF they happen to actually have the remote next to the TV, you could try looking through the various options before making a purchase, but if buying online you can’t.

We just wish that the TV manufacturers would disable overscan by default – for the most part it’s not needed anymore, and degrades the picture.  Also, we wish they’d all provide an easily accessible and clearly labeled control to enable or disable it that applies to ALL the inputs, not just the VGA or DVI input.  We suppose it might be too much to ask that they agree on a common name for the setting, though that would certainly make things easier on consumers.  So far, only some of the Sharp TV’s actually have a control labelled “Overscan”, which is described in the manual this way:

If only all HDTV manufacturers would do that!  Even Sharp isn’t consistent – on some of their TV’s the setting is called “Dot by Dot”, and on some of their older models it can’t be enabled for anything other than the VGA input (unless maybe you use a hack to make the option appear, but you can only do that if the source is a Linux-based computer that utilizes an xorg.conf file, or you have some other way to set “CVT reduced blank” on the sending computer or device).

If you are lucky enough to have such a setting, you might want to make sure it’s turned off for display of the full picture area, and less distortion of the picture.  And if you are considering the purchase of a TV, make sure it has this setting!  Unless, of course, you like the idea of deliberately introducing distortion into your video, and you don’t mind not seeing top and/or bottom menus when you connect a computer.

We’ve shown you how to use SSH to transfer files securely. But there’s a major issue with SSH’s default behaviour. You are only connected with the remote machine after you’ve manually entered the password which rules it out for any tasks you want to run unattended. Or does it?

Here’s a quick lowdown on how the OpenSSH CLI tools (scp and sftp) work so that you can better appreciate the issue. When you want to copy over files to or from the remote host, you can use scp which automatically initiates a SSH connection to the remote host. Every time you run a scp command it establishes a new connection to the remote. So if you have multiple scp commands you’d be entering the same password several times.

This is why you wouldn’t want to use scp in any scripts you want to run unattended. There’s also the fact that if you have multiple accounts on several machines on the network, you’d have trouble memorizing unique, strong passwords for each.

To overcome this problem, you need to switch OpenSSH’s default authentication mechanism to a key-based system.

Everyone loves a speedy computer. No matter how fast your computer is already running, I am sure you are keen to make it run even faster, and smoother. Here is a compliation of the tricks we use to speed up our Linux computer.

The tips in this tutorial are suitable for speeding up both modern multi-core setups as well as older single core hardware that are low of resources. Also note that some of the tricks can be carried out with ease, while others require some familiarity with the Linux command-line.

The Raspberry Pi is being used increasingly in professional products and industrial applications, and this one from Artica and partners is one of most impressive yet. I can’t better their own description of FM Stream as “a beautiful, low cost, carrier grade rack of FM tuners, IP/Internet encoders and broadcasters, using nothing but RaspberryPis, Arduinos, clever electronics, neat mechanics, a shiny aluminium case and lots of passion.”

The upstream openssh project sets the value ServerKeyBits to 1024, but Debian and Ubuntu currently unfortunately have a lower security setting of 768 bits. I’ve filed a bug to fix this. In the meantime, here is how to make that change now!

Recently, a new piece of malware has been wreaking havoc online, locking innocent users out of their files and demanding money. Cryptolocker is a form of virus known as “ransomware” – a variety that attempts to extort money in exchange for providing users with what they already own, but can no longer access.

So what is it about Cryptolocker that changes the game, and how do you prevent yourself from falling victim to this vile threat. That is precisely what we want to look at today.

Full article here:
What is Cryptolocker and How Do You Prevent It? (Make Tech Easier)

We would also add that frequent backups to media that is not connected 24/7 is probably a good idea. If you backup to something that requires a user name and password to access, and it’s not already connected at the time the attack occurs, then that data is probably safe. If you happen to have a recent backup made using something like Redo Backup and Recovery, then should an attack like this occur, you can simply wipe the drive clean and reformat it, then restore from your backup and get most of your files back. But that only works if you make the backup before your system is infected, and only if the attacker can’t access your backup file and corrupt that. So if you choose to backup to a network share, make sure it’s a share that you must log into using a strong password before you can access it, and that it’s NOT a share that you normally stay connected to during day-to-day use!